Hey guys, in this video we're going to talk about a phenomenon that waves undergo called interference. When two waves occupy the same position at the same time they interact with one another through interference. Let's get to it. Imagine two water waves approaching one another, when they meet their waves produce what we would call a net wave we'll call it a net wave for now. Imagine two scenarios, first if a peak and a peak meet. So here we have a peak and another peak coming towards each other. When they meet, their two peaks add up to create one giant peak. This peak is a larger or it's taller than either of the two peeks that went into it and then the two waves continue on their way. So they break apart and they just continue on their way. Now the other scenario is a peak and a trough. If we have a trough heading towards a peak. When they meet the peak fills in the trough, all that water pours into the trough and it neutralises itself. The net peak is shorter than either of the two peaks that went into it and then they once again separate and continue on their way as an individual peak and individual trough. This is interference when the waves occupy the same position at the same time, they interact with one another and we would refer to the net wave as the interfered wave. When two waves occupy that same space at the same time they interfere, their displacements interact with one another. I'm going to minimise myself for this part so we have a full view of this graph right here.

Now these are both position, sorry, displacement versus position graphs. So they're assumed to happen at a single time so if I were to draw a line right here those two waves are occupying that exact space at that same time and those two waves are both pointing up so their displacements are going to add and create one giant wave. Now if I consider this point right here, the purple wave is zero it has no displacement. The pink wave has a negative displacement so that's going to produce this little bump right here. Next if I draw a straight line down through here we can see that the pink wave is above the horizontal line but the purple wave is below and the purple wave is further below than the pink wave is above so it's going to create a negative peak, a trough, that is slightly shorter than this peak was originally. This positive is going to take away from how large this negative is and we're going to get this little dip right here and then the whole thing is going to repeat itself. Sorry wrong colour. The whole thing is going to repeat itself. You have this right here, you you have this right here and finally you have this point right here and this is going to keep repeating itself and repeating itself and repeating itself. So this interference wave, this interfered wave is also cyclic but it's not a simple oscillatory motion so you can't simply describe it as a single sine or a single cosine wave. Both of the ones all the way to the left were described as single cosine and single sine waves but they had different frequencies. When they have different frequencies this interference pattern looks super complicated but then in general the resultant displacement that interfered displacement between two interfering waves is always going to be whatever the first wave happens to be, the displacement of the first wave happens to be at some position at some time, plus whatever the displacement of the second wave has to be at that same position at that same time. Not only two waves interfere, you can have an infinite number of waves that interfere so this technically is a sum. More waves can come into this equation as well. Now interference occurs in two types, when the resultant displacement is greater, either more positive or more negative, it's greater in magnitude than either of the waves displacement we call that constructive. When the result in the displacement is lesser either a lesser positive number or a lesser negative number, a lesser magnitude than either of the waves that went into it we call this destructive interference. Alright let's do a quick example to wrap this up.

Practice: In the following figure, two interfering waves are drawn at some instance in time. 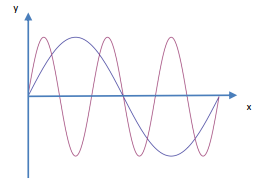 Hey guys, in this video we're going to talk about reflection of waves. Let's get to it. When a wave encounters a boundary between two media it can do two things. It can reflect off of that boundary or it can transmit through that boundary. Waves will actually do some of both. What we would call reflective surfaces are surfaces that only allow reflection like light off of a mirror and what we call transparent surfaces are surfaces that mainly allow transmission like a window that mainly allows or a very very very thin window mainly allows light coming through. On most windows though you have a bit of reflection of light, you can see a reflection in the window and transmission of light, light from outside is coming through that window so you can see the outside world. Alright, whenever a wave encounters a boundary it exits the boundary at the same frequency. This is another fundamental fact of waves. You have to remember this, that no matter what situation when a wave encounters a boundary it exits that boundary with the same frequency. This is true regardless of whether it undergoes transmission or reflection. So if it transmits it enters the new medium with the same frequency, if it reflects it stays in the same medium with the same frequency and this is another fundamental feature of waves.

Alright, now imagine a wave heading to a wall. Let me minimise myself so we can see this figure. This boundary we'll say does not allow transmission of the wave, it's a wave on a string that wave meaning that string has no way of passing through the wall so the wall which is that separation of media prevents transmission. When the wave encounters the wall though it is going to reflect off of it. So it's going to come in, it's going to get close and then it's going to reflect away. The reflected wave will have the exact same frequency as the incident wave, the wave approaching the boundary, but it is inverted. We see here that I drew the wave upside down because when the anchor point is fixed for a wave the reflected wave is going to be inverted and the reflected wave then just travels back towards the point of its origin so if you're over here whipping the rope up and down producing these waves these waves are going to propagate forward, reflect off of the wall and then propagate back towards their point of origin.

Now imagine a different scenario. We have a wave on a light string heading towards a portion of the string that is heavier. We're going to say that the mass per unit length of the string increases. This is a boundary right here between two media because the wave in the first string is in a medium where the mass per unit length is low and then any waves on the second portion of the string is now in the new medium where the mass per unit length is much higher. This boundary allows both transmission and reflection. The transmitted pulse is going to have the same frequency and it's going to be upright, the reflected pulse is also the not same frequency remember same frequency regardless of whether it's transmission or reflection but the reflected pulse is going to be inverted. Just as if it was bouncing off of a wall.

Alright, if there are multiple waves stretching along the entirety of the string instead of just the single pulse meaning as you have pulses bouncing off the boundary they're going to come back and interact with pulses going towards the boundary you're going to have a whole bunch of interference along that string. We already talked about how waves when they occupy the same position at the same time are going to interfere so in the specific instance of a wall what you're going to have is you're going to have a string with a whole bunch of waves coming towards the wall and a whole bunch of inverted waves coming off of the wall and those inverted waves and those upright waves are going to interfere once they cross over each other and this is actually the specific scenario that we're going to talk about in a little while. Let's do an example. This isn't a quantitative example, this is just a qualitative example. Whenever a string is fixed at a boundary, the wave along the string reflect off the boundary's always inverted. Why is this so? Would the wave be inverted if the string were free to move at the boundary? So let's consider two scenarios, one where our rope is fixed at a wall and one where our rope has a little ring here that's free to move up and down without any friction and the wave is moving. Well the reason why waves when they encounter a boundary that they're fixed are inverted coming off is because when the wave reaches there it pulls up on the anchor point. This is putting a force on the wall and the wall puts an equal and opposite force back onto the string and that pulls it down and inverts it. Without that fixture point you aren't going to have that equal and opposite force. What's going to happen here is when the wave reaches here and it lifts up there is not going to be a force pulling it down this loop is just going to go up. So it's going to go up and it's going to fall back down and it's exactly as if you whip the string from the other side. So this is going to have inverted waves reflected off of it and this is going to have upright waves reflected off of it if you were to have the end free to move at the boundary. Alright guys, that wraps up reflection of waves. Thanks for watching.