Intro to Moment of Inertia

See all sections
Learn
Next SectionMore Conservation of Energy Problems

Concept #1: Intro to Moment of Inertia

Practice: A system is made of two small masses (MLEFT = 3 kg, MRIGHT = 4 kg) attached to the ends of a 5 kg, 2-m long thin rod, as shown. Calculate the moment of inertia of the system if it spins about a perpendicular axis through the mass on the left. 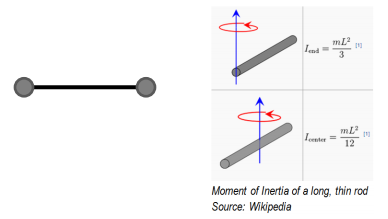 Example #1: Moment of inertia of Earth

Hey guys so as you know the Earth is rotating therefore it has a moment of inertia and if we make some assumptions about the shape of the Earth we can actually calculate the moment of inertia of the earth let's check it out, so it says here Earth has a mass and radius given by these big numbers and they also tell you that the radial distance between the Earth and the sun is this, what I mean by a radial distance is that if the Sun is here the Earth spins around the sun and this distance here little r is 1.5x 10(11) squeeze it in there, that's what I mean by that and then I gave you the mass of the Earth and the radius of the Earth as well I want to know the moment of inertia of the earth as it spins around itself and as it spins around the Sun, as you know the Earth has 2 motions and we can calculate a moment of inertia about or relative to those two motions or for those two motions, remember moment of inertia depend on the axis of rotation that's why these numbers will be different so if you want a moment of inertia of the Earth around itself you would have to treat the earth as an object with a significant size you can't treat it as a tiny object so what we do here is we're going to treat the earth as a solid sphere So the Earth is a big ball that spins around itself. Now technically it's at an angle like that but it doesn't really matter you can just do this, OK? So, it's spinning around itself and your book would show you that solids sphere have a moment of inertia given by this equation right here so when I tell you solid sphere I'm indirectly telling you hey use this equation for I, OK? So, for A part we're going to do part A is over here, we're going to say I= 2/5 MR squared and all we're going to do is plug in the numbers here so M is the mass of the earth which is 5.97x10(24) and R is the radius of the earth which is this and not the radial distance, it's the earth going around itself so it's the radius of the actual object or the sphere, 6.37x10(6) squared, OK? If you look at this number I got a 24 and then I got a 6 squared so you should imagine that this is going to be a gigantic number and it is I multiplied everything I get 9.7x10(37) kilograms meter square, the Earth has a lot of inertia and what that means is that we're being incredibly hard to make the earth stop spinning, OK? Now if you were to google this number you would see that it's actually a little bit off the actual moment of inertia is a little bit off and that's because the earth is not a perfect sphere it's got different layers it's not even a sphere so but this number is a pretty good approximation.

For Part B we want to find out what is the moment of inertia of the earth as it spins around the sun, now in this case relative to the Sun the Earth is tiny so we're going to treat it as a point mass which is crazy the earth is huge thing and you're going to just treat it as a little point mass of negligible radius and that's because relative to the Sun the Earth is negligible in size, OK? So, I'm going to put the earth here as a tiny M earth and it's going around the sun and the distance here the radial distance which is little r, big R is radius of an object and little r is distance to the center is 1.5x10(11) meters in this case we're going to use instead of 2/5 MR we're going to use MR squared because the Earth is being treated as a point mass here, M is the mass of the object itself, right? It's the object that spinning it's not Sun so it's going to be 5.97x10(24) same thing but r is going to be the distance to the center which is 1.5 so 1.5x10(11) squared I got a 24, I got an 11 squared this going to be again a gigantic number, 1.34x10(47), this number is like a billion times bigger than the other number, right? So as hard as it would be to get the earth to stop spinning it would be way harder, right? It would be 10 to 10 times harder to make the earth stops going around the sun, and that's it so that's very typical classic problem hopefully it makes sense you should try this out on your own and let's keep going.

Practice: A solid disc 4 m in diameter has a moment of inertia equal to 30 kg m2 about an axis through the disc, perpendicular to its face. The disc spins at a constant 120 RPM. Calculate the mass of the disc.

Hey guys, so here's another pretty straightforward moment of inertia question the only difference here is that we're going to have density to deal with so let's do this real quick. So, it says we have a planet that is nearly spherical, nearly spherical means that it's a sphere, OK? So you can basically ignore the word nearly It means we're going to approximate it as a sphere with nearly continuous mass distribution, again you can ignore the word nearly and assume that it has continuous mass distribution, continuous mass distribution we'll talk more about this later but it basically means that a sphere has the mass evenly distributed throughout the sphere so you sometimes you see drawn like something like this, this is a solid sphere and this is opposed to a hollow sphere which is a sphere that has nothing inside, it's not continuously or evenly distributed all the mass is concentrated on the edges this is not what we have here this is what we have here the reason why that's important is because you're going to get a different I equation a different moment of inertia equation depending on what kind of sphere you have and the moment of inertia equation for this guy here is 2/5MR squared, the question didn't give you this but you would look this up in your book or in a test he would have to give you this somehow unless your professor requires you to memorize these and then you have to do that but most of them don't, alright? So that's the equation you're supposed to use I give you the radius right here radius is 8x10(7) meters and I give you the density, density you can use D but the official variable if you will is row, right? It's 10000 Kilograms per cubic meter, I want to remind you that if you have a volume the density of a volume is mass over volume and you could have seen this from the units kilograms cubic meter, cube right so it's a volume it's a three dimensional object, and that's it that's all we're given I also give you here the equation for volume of a sphere, volume right here of a sphere, now if you were looking for I and if you start plugging stuff in here you would realize you don't have M but you have R, OK? So we don't have M we got to figure this out and if you look around you, you realize well we have another piece of information that has some connection to M so maybe I can use this to solve for M and that's exactly what we're supposed to do so I want to find M I have 10000 but I don't have a V but once again I have another piece of information here that allows me to find the V, V= the volume of a sphere= pie r cubed and I know, I know r so I can get V I'm going to V so I'm going to be able to get M I'm going to know M o I'm going to be able to get I, OK? That's how it's going to flow. Alright so what I'm going to do is right here I'm going to solve for M in other words I'm going to move V over here so M=10000V and V is according to this equation right here 4/3 pie r cubed so I'm going to get this whole thing which is M and I'm going to stick it in here, OK? So, 2/5 x 10000 x 4/3 pie r cubed, this is just M and then I also have the R squared here, tons of Rs, OK?

And if you multiply this whole crap you're going to end up with let's see this is 18...I'm sorry this is 8 so this is going to be 80000/15 so it's 80000 pie, did I get that right? Yep, divided by 15 times r to the fifth, these two guys combined R to the fifth so it's going to be 8x10(7) this thing to the fifth, OK? So, you should expect a pretty big number and I get 3.15x10(45). Now how exactly do you arrive at this number doesn't really matter it's I so it's kilograms meter square you could have you know gotten a number here plugged it in here it really doesn't matter as long as you're right here it's a bunch of multiplication, cool? So that's it for this let me know if you have any questions.

Videos in Intro to Moment of Inertia