Example #1: Force on Charge Moving at an Angle

Hey guys. So, in this example, we are looking for the force on a charge, that's moving through a magnetic field in three different scenarios, let's check it out. So, we want the magnitude and direction of the magnetic force, so we want the magnetic force on a 3 Coulomb charge, so q equals plus 3. So, it's positive, so we're going to use the right hand rule for direction, we would use the left hand if it was negative and it's moving with this velocity here, v equals 4 and it has a 5 Tesla magnetic field, that's the strength 5 Tesla and it is that field is directed in the positive x axis, okay? So, that's the field right there, and we want to know what is this force, if the charge is initially moving in these three directions here. So, in all three cases B is going to the right, but the direction of the velocity is different, here the velocity is going up, here the velocity, because it says positive Y axis, here the velocity is going to the left because it's negative x axis and here, it makes 30 degrees with the y axis. Now, the positive y axis over here, this is a little bit ambiguous because you could make 30 degrees with the positive y over here, right? This guy is 30 degrees away from the positive y but this guy is also 30 degrees away. So, we'll talk about that when we get there. So the equation we're going to use is the only equation that makes sense, is the equation for force on a moving charge, right? Which is q, v, B sine of theta, I know q, v and B, weÕrehich is going to plug those, so the challenge here is just making sure we find the right angle, the correct angle. So, q is 3, v is 4, B is 5, those are given, theyÕre up here and the angle we should use is the angle between the two vectors, between v and B, is the angle we should use, v is up, B is to the right, v is directly up, B is directly to the right, so they're exactly perpendicular to each other, they make an angle of 90 degrees, so sine of 90 degrees, sine of 90 by the way is 1, so the answer is just 60 Newtons, okay? And, what about the directions? Well, we're going to use the right-hand rule. So, remember, my fingers represent multiple lines, so itÕs my B field, it's going to point up like this and, it's actually like this, right,? aAnd my velocity should go up. So, it's already up, so this is the direction I should be looking, for, most ofnotice that my palm is out, my palm is away from me and you got to do this yourself, looking at your page, right? If you put your hand in front of you and you see that your palm is away from you, it's going into the plane or into the page, okay?

So, the direction is into the page, okay? So, we wanted the magnitude, we got it, and we wanted the direction and that's the direction. What about here? FB is going to be the same thing, 3, 4, 5 times sine of theta, but here the angle between v and B is 180, right? They're anti parallel to each other and the sine of 180 is 0, that means that there is no force at all, okay? And, if there's no force then there's no direction for you to worry about, right? Now, how can you remember this? One way to remember this, is if you look at your right hand rule, this should serve as a reminder, that B and v are supposed to be at 90 degrees and what I mean by are Bby supposed to be, is this is the scenario in which you get maximum force, okay? If your vB moves a little bit, now you have less force, you've lessft the maximum but youwe still got some force and if you go all the way, right? As you do this you're decreasing the magnetic force all the way to here, and when you get here, which is parallel, to 0 degrees, right? Parallel, now you have 0 force. Same thing, if you go all the way over here and you are at 180, I can't really do that, that hurts, then that's going to be 0 force as well, cool? Maximum force, little less force, 0 force, cool. So, let's jump into this one here. Here, I would talk about how there's two directions, because it's not clear, it's ambiguous, but actually doesn't matter because the magnitude would be the same, okay? The magnitude would be the same. So, if you want, you could have calculated the two different angles, right? This, the distance, the angular distance between this red arrow and this blue arrow here is 60. Remember, you don't necessarily use the angle thatÕs given to you, you use the angle depending on the definition, definition of the angle should be the angle between v and B. So, got to be very careful whenever you see an angle, okay? So, that's one angle you could have used, letÕs call that theta 1 or you could have used the angle all the way to this blue arrow here and that theta 2 it's 90 degrees right here, plus the 30. So, 90 plus 30 is 120. You could have used either one of these guys and you would have gotten the same answer because sine of, IÕm going to use 60, right? Sine of 60 and you can plug this in to double check equals sine of 120, right? So, it's the same thing, you get the same answer no matter what, and that answer is 52 Newtons. Remember, I told you that if you're slightly at an angle, you're going to get less than maximum, this is the maximum force you can get, for this arrangement, this is a little less than maximum, right? And this here is the minimum which is just 0, okay? Now, what about the direction? Well, B is this way and you can have your charge even move, either moving that way or this way, right? Either way, for both situations my palm is away from me. So, if you look at your page and your palm is away from you, which means you're looking at the back of your hand, that means that the force is going into the page as well, okay? So, the direction here is into the page for both of those situations, cool? Let me get out of the way, it's into the page, cool? ThatÕs it for this one guys, let«s keep going.

Practice: An electron is moving in a straight line (red line below) when it enters the horizontal 0.2 T magnetic field (blue lines). The angle shown below is 37°. If the electron experiences a 10-12 N force upon entering the field, how fast must it be moving? 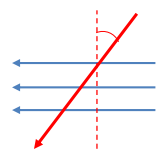