So, let's keep talking about this real quick, we have two more points to make, if a charge moves perpendicular to a magnetic field, that's what we just discussed, right? Here, this is perpendicular to a magnetic field up here, you're going to get circular motion, okay? You're going to get circular motion, circular motion, if a charge moves parallel, perpendicular is 90 degrees, parallel is 0 degrees to the magnetic field. Remember, what happens is FB is q, v, b, sine of theta and if we're doing sine of 0 sine of 0 is 0. So, there is no force therefore, there is no force, which means this is going to move in a straight line, it's going to keep moving straight, okay? And, if you're moving at an aim, at an angle to the magnetic field. So, for example, if your V is this way but your B is this way. So, there's an angle here, you're going to have helical motion, helical motion, okay? Which looks like this, you are moving in this direction while also spinning, okay? You're moving and spinning, which is going to look like this, okay? You're moving like this. Alright, so this is helical motion, cool? You should note that conceptually, and the last point I wanna make is you may remember that the work done by any force is given by this equation f, Delta x, cosine of theta, where theta is the angle between the direction, the displacement, and the direction of the force, the two vectors of the equation, and the work done by the magnetic force in this case is going to be 0 because you're going, if you're going in a circle, right? Because you're going in a circle, it's going to be 0 because at any point your Delta x is tangential, let me get out of the way, at any point your Delta x is tangential and your force is centripetal, and this angle here is going to be 90 and if you write F, Delta x, cosine of 90, right? This equation use cosine not sine, this is going to be 0, everywhere you go when you go in a circle you're going to have this, okay? And by the way, you may remember this, the work done by any centripetal force is always 0, okay? So, that's where this stuff comes from. Alright, that's it for this one, let's keep going.

Practice: A 4 kg, 3 C (unknown sign) charge originally moving in the +x axis with 5 m/s when it enters (red arrow) a small square area that has a constant magnetic field, as shown below. The field causes the charge to be deflected, and it exits the area moving in the +y axis. What is the magnitude of the magnetic field? (Is this charge +3 C or −3 C?) 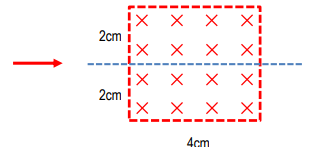 Videos in Circular Motion of Charges in Magnetic Fields