Sulfides are more reactive than their oxygen-containing analogs, ethers, because they have an expanded octet and can form additional bonds with other atoms. They are particularly susceptible to oxidation.

Now we're going to explore the oxidation reactions of sulfides. Before we can talk specifically about sulfides, I think we need a little refresher on what oxidation is because it might have been a little while since you saw oxidation-reduction.
Just remember that oxidation is any reaction that's going to involve the increase in the oxygen content of a molecule. Now that doesn't mean that you're actually adding oxygens. It could just mean that you have more bonds to an oxygen.
This is a little table that I use during my oxidation-reduction lectures and what you should know about it is just you can see the pattern. As you move to the right, these molecules have more and more bonds to oxygen. If you think about it, a sulfide, what does a sulfide look like? We're going to look at it in a second, but it's a sulfur with zero oxygens on it. As we oxidize it, we would expect that we're going to get more and more bonds to oxygen. Cool.

Oxidation reactions involve an increase in the oxygen content of a molecule.

So one thing to keep in mind is that sulfides typically sulfides are the analog of an ether, OK? If you look at this sulfide down here it's basically an ether, right? Except instead of having an oxygen it has a sulfur, OK? Ethers we've learned in the past if you guys have watched my Ethers lectures then what you're going to see is that ether don't really react anything they're very very difficult to make react but sulfides actually are going to be more reactive because they have an expanded octet, remember that the expanded octet means they can fit up to six bonds with the sulfur so it's going to give it more liberty to react with oxygen, OK? And that means that they're really going to be pretty easy to oxidize so before we talk with the reagents I just want to talk about how to recognize these functional groups because I know that they're new I know we don't see them a lot, remember that a sulfide is an ether with a sulfur, OK? Now a Sulfoxide would be once I've oxidized it one step I'm going to get to sulfoxide now sulfoxide is really the sulfur analog of a ketone, OK? So let's say that I've got my ketone usually it has a carbon in the middle but I'm changing it for a sulfur that would be a sulfoxide, OK? So that's one way to remember it but it turns out that the sulfoxide really could be oxidized again because sulfur can have up to six bonds so if I want to oxidize it even more I could take it all the way to a sulfone, now sulfone there really isn't anything that I can use to help you think of it because we've never really named and we haven't really been naming a lot of molecules the had six bonds so it's not like I'm comparing it to anything from a carbon structure but just commit it to memory a sulfone is the most oxidized form of a sulfide, OK? So now how do we go from one to the other? Well it turns out that most oxidizing agents are actually going to go all the way to sulfone, OK? Because like I said are sulfides easy to oxidize? Yes, OK? So almost all oxidizing agents will take it all the way to the sulfone usually we're talking about hydrogen peroxide it's a pretty strong oxidizing agent also KMnO4, KMnO4 is like that famous oxygen agent we use for a ton of things and both of them are going to take a sulfide directly to the sulfone without stopping in the middle but what if I really want to stop I really want to just oxidize it to a sulfoxide and not get the sulfone, OK? Well then, we're going to use a very particular reagent, OK? So if I use an NaIO4, OK? What that's going to give me is that's going to give me a partial oxidation, OK? By the way it's called sodium periodate, OK? sodium periodate let me just write it down so you guys can know in case you see it.

sodium periodate, OK? So if you react sulfide with sodium periodate what that's going to give you is instead of a full oxidation it's only going to give a partial oxidation to the sulfoxide and it's going to stop so if you react the sulfoxide with sodium period there's no reaction because it can't oxidize the sulfoxide but if you do have the sulfoxide and you say hey I'm bored of this I want to just take it all with the sulfone you can always use hydrogen peroxide again, OK? Or even KMNO4 just letting you know that if you ever want to stop in this middle stage you would use sodium periodate, OK? So really this is not a very hard topic I just want to introduce these three different oxidation states Sulphur and let you know what the different regents are, hope that made sense let me know if you have any questions. 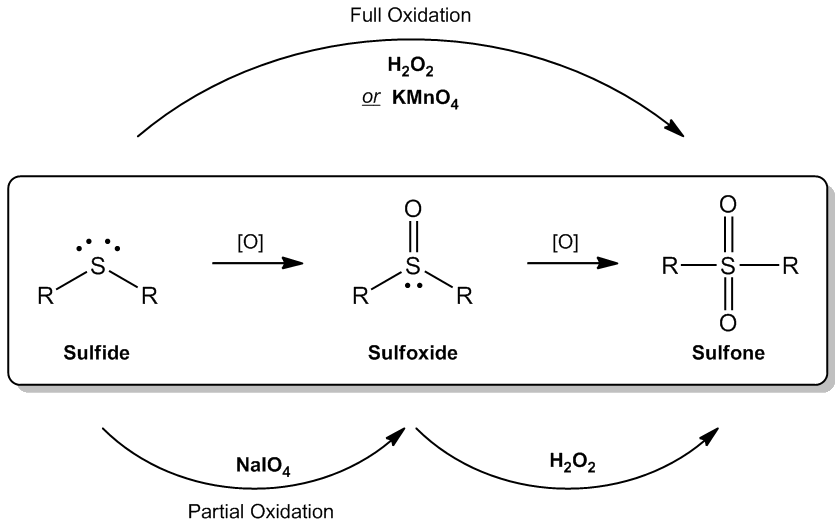