Sulfur is right below oxygen on the periodic table. So that means it can form analogs of common oxygen-containing functional groups.

Concept #1: How to name sulfur-containing compounds.

Example #1: Provide the IUPAC name for the following compound. 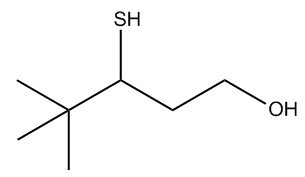 Example #2: Provide the IUPAC name and common name (refer to common naming for ethers) for the following compound.