See all sections
Learn
Next SectionMonosaccharides - D and L Isomerism

Sugars, saccharides, and carbohydrates are all different words for the same types of molecules. Now that we're all on the same page, let's begin our journey on these fascinating molecules.

Remember that a ketone needs to have R groups on both sides, you can't put a ketone all the way at the top, it needs to be at least on the second carbon. Very good. So, easy enough so far all the definitions that I gave you at the beginning aren't checking out. Now, let's talk about some more general features. There's so much to learn about carbohydrates but we have to start with the baby steps. Let's start out talking about naming. So, monosaccharides can be described both by generic names and by specific names, at this point you're probably more accustomed to hearing the specific names, so what's a specific name? Glucose, we've all heard of glucose before, it is a name that describes one specific monosaccharide but we need to know is not only, probably a few of those specific names, but we need to know the general categories and those are described by generic names. So, how do you name a sugar with a generic name? Well, the first thing you start off with is the carbonyl type, so is it an aldehyde or a ketone? That's going to give you either an alto- or a keto- prefix. Next, you would go to your carbon chain length, then you say how long is the carbon chain. Now, here this is where things get a little tricky. Remember, I said this is an old field of organic chemistry, meaning that the naming conventions were devised pre-IUPAC, before IUPAC. Remember, IUPAC was in 1919, a lot of this sugar chemistry was discovered in the 1800Õs; so what that means is that a few of the names sound familiar and a few of them don't really meet convention. So, it's pre- IUPAC names with an ÒoseÓ ending, so for example: -pentose and Ðhexose, that makes sense, that would be IUPAC, right? Because pent- is the prefix for five, hex- is the prefix for six, so that makes sense, but then a four carbon sugar isn't called butose as we would have expected, IUPAC it's called a -tetraose, why? It's random guys, someone named this before IUPAC got started and then they just stuck with it, and then a three carbon is called a -triose. So, just letting you guys know that you're not going to respon-, be responsible for all the names up to like 20 carbons, as long as you know those four you're probably, okay? Cool. So, we'll name more in a little bit but I want to talk about some stereochemistry as well. So, the total number of stereoisomers possible for a sugar is described by the same formula we used in our chirality section a long time ago, 2 to the n, where n is equal to your stereo genic centers. So, guys why is this important? Because sugars are notoriously complicated in terms of their stereochemistry, because they have so many chiral centers, okay? Remember that guys, these are Fischer projections that you're looking at here and remember Fischer projections are designed to show you the chirality of each atom. So glucose, for example, has how many chiral centers? Every single, like intersection is a chiral center, so this would be one, this would be another, this would be another, this would be another, the top one is not chiral because there isnÕt four groups, the bottom is not chiral because there isnÕt four different groups, so we have four chiral centers. So, that means just glucose, glucose has how many total possible stereoisomers? Well, it would have 2 to the 4, because we're using the 4 to the n formula, so that means that glucose has 16 possible stereoisomers, okay? So, it just shows you an example of using the 2 to the n formula, okay? Now, once again guys, I have to preface this by saying this is in old field of organic chemistry, so we're going to be learning a lot of new terminology that's specific to sugars, that it doesn't apply to any other types of molecules and one of those words, that's a new word is an Epimer, so what is an Epimer? So, an Epimer guys, is a stereoisomer of a monosaccharide that differs at only one chiral carbon. So, essentially, what an Epimer is, is it's a diastereomer. Remember that diastereomers were two molecules that were related by having some of the chiral centers changed but not all of them, right? They were non mirror image stereo isomers. So, what an Epimer is, is it's a specific type of diastereomer that differs at only one chiral carbon, so how could we look at an example? Well, let's look at one of the Epimers of glucose, if all you did was you kept this chiral center the same, you kept this chiral center the same and you kept this chiral center the same, notice that the OHÕs are all in the same place, but then you move the second OH, the C to OH from the O over to that side, that would be an Epimer and that will be an Epimer because the diastereomer that differs at only one carbon, alright? Cool guys. So, great job so far, we're just scratching the surface, there's so much more to learn from a monosaccharides but let's go ahead and do some practice problems.

Monosaccharides can be described by both generic names and specific names.

Practice: Provide the generic name for the following monosaccharide. 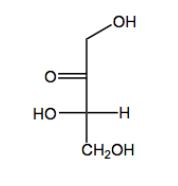 Practice: How many possible stereoisomers AND epimers exist for the following aldopentose? Draw all of the possible epimers.