Let's see if you got this first one right so for this molecule, how many different types of bonds were you able to spot? It turns out there's more than one type of bond here there's actually two types of bonds, let's go ahead and see the first one that I'm looking at here is a CC single bond, OK? That would be all the bonds you know that are making up the Alkane, OK? The second kind of bond that I could spot is a CH bond because there's hydrogen everywhere, right? But we specifically have to include what's the hybridization of that CH because remember the peak is going to change depending on what type of hybridization it is so being an alkane these would all be our SP3CH bonds, alright? So now I know what you're thinking, you're saying Johnny but I thought the CC Bond didn't matter and that's exactly right you got it right it turns out that this first bond I'm just going to cross out because it doesn't matter this is a single bond that's not H so where would it result? You got it fixed fingerprints, so this is fingerprint and for right now I still want you to identify the fingerprint region bonds but don't worry about memorizing anything with them I just want you to identify it and say that's irrelevant, OK? So exactly we did that right this doesn't matter I'm just going to cross it out like we did the only one that really matters is this one so we've got one absorption and where would that absorption be? That would be around 2900 so if you got that if you got that wave number if you got that one peak you're good if you forgot to identify the single bond that's OK don't worry about it but for this next one as we keep moving through to the new examples try to identify every single bond that there is and then throw out the ones that are in the fingerprint region so you can just focus on the functional region bonds, alright so move on to the second question.

So how many different types of bonds did you guys find for this one? Well that's more than two I'll tell you that let's go ahead and start off with the ones that don't matter these are going to be single bonds to stuff that isn't an H so that would be one I've got a C-C single one fingerprint region again, 2 I've actually got to C single bond O that's also relevant because it's a single bond that's not a hydrogen so I can immediately cross both of these out, OK? Do we have anything else? Yes well, we have three we've got our CH bond again, OK? And once again this entire thing isn't alkane So it's going to be SP3, so SP3 CH, OK? And we do have a last fourth one which is OH does that one count? Yes because that is a single bond to hydrogen so that means here you have to identify the wave numbers of two different bonds so for our SP3CH we know the value is again 2900 and what would be the value of the OH? Do you guys remember? It's actually a really big range you can't just say one number you can never say just one number for broad peak because broad peak by definition spans multiple wave numbers so the range you guys need to learn for alcohol is 3200 to 3600, OK? So we're just going to say 32 to 36 because it is such a broad signal, alright? So I think you guys are getting the hang of this let's move on to the next question.

So here's another one I hope that you guys were able to find four different types of bonds let's first of all talk about I guess the one that doesn't matter which is C single bond C, we know that we see that around but there are a few ones here that do matter so for example a new one that we had in this question is a C double bond C, now remember that gets its own signal that's a double bond so that would be in the double bond region so that's something to hold on to, we'll do values in a second, 3 there was our SP3CH that would be the entire alkane portion of this molecule, what's the fourth peak? Good job so the fourth peak is actually going to be SP2CH, why? Because there's two hydrogens on this molecule that are located on an alkene those hydrogens are going to have a higher wave number than the rest of the surrounding hydrogens, why? Because they have a different hybridization, OK? So now we've talked about well how many signals or how many different absorption frequencies do I need to state here? 3, we're not going to worry about fingerprint but what's the wave number that we have to memorize for an alkene, C-C double bond that would be 1600, OK? We're just going to go the value first of sixteen as one stated value, OK? It's a pretty sharp peak so that's fine, for SP3CH 2900 and lastly for SP2CH this should be easy if you remember that I just said it's going to increase by 200 for each hybridization so that means the SP2 would be 3100, Got it? Awesome so that was a little bit more tricky but you guys got this, let's move on to the last question.

On this question you might notice an added complication because I threw in what we called earlier a complex carbonyl, remember I told you guys how complex carbonyls are the ones that are not just going to result in one area they're going to result in two and we need to be able to identify that, so first let's go with the easy ones here we can get rid of our C-C single bond we know that there is going to be an SP3CH bond, OK? That would be just quickly identifying it that would be like hydrogen right there that would be SP3CH, OK? But now we get to the part of the complex carbonyl, OK? So 3 let's just talk about first of all the C double bond O, where is that going to result? Now keep in mind C double bod O is a carbonyl so that means that it could result in remember we have a big range for our carbonyl region I said it was something like 1680 all the way up to 1840 so pretty big range there but specifically because this is an aldehyde because of corn where you expect to find it? Remember that an aldehyde count as the R in corn because it could either be aldehyde or ketone R or H, OK? So that would result at 1710, OK? So we've got the frequency for the aldehyde but what else do we have to worry about? The CH because it's a complex carbonyl so we're also going to have a bond to H to worry about so specifically the aldehyde H gets its own unique peak and that's going to be at 2700, OK? so hopefully not in the way there you can see what I'm writing here we've got the complex carbonyl with two different peaks just as a pop quiz, what's the other complex carbonyl that we're going to worry about in this course? Carboxylic acid because Carboxylic acid has a peak in the Carbonyl region and has a very broad peak in the hydrogen region, OK? So guts that's it for this practice problem I think you guys got the picture of what you need to do now, you're doing great let's move on to the next topic.

Practice: Answer each of the following questions based on the images below.

d) Which compound has no signal beyond the fingerprint region?

Practice: Identify which carbonyl group will exhibit a signal at a lower wavenumber 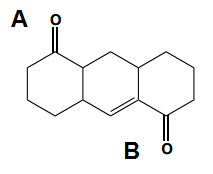