Ch. 4 - Alkanes and CycloalkanesWorksheetSee all chapters

Since double bonds and rings can’t rotate, we need different names for the different arrangements they can create.

Concept #1: How to name different types of double bonds or rings

Now that we know how to name double bonds, there's an extra complication that we have to consider, which is that double bonds, because of the lack of free rotation, are going to be able to arrange themselves in different ways. Now we have to take into account not only the fact that there's a double bond and it has priority, but we're also going to have to take into account the arrangement of that double bond. So let's go ahead and get started.
So I'm sure you've heard of the word cis and trans before. Cis and trans are names given to particular arrangements of double bonds or of rings. Basically, any time that you have no free rotation you're going to have the possibility for cis and trans.
For example, a double bond – if two groups are oriented in the same position – remember that a double bond has a lot of regions of overlap, so it can't twist out of shape. So that means a double bond is stuck there.
In the same way, a ring has the same problem. Where if I, for example, have a ring that looks like this and then I have a group facing up and I also have another group facing up. So notice that this is like a 3D structure. Let's say this is one atom and another atom. See how they're both facing the same way? I can't actually rotate this one to the down position without breaking the ring because that ring in order to move one down, it would have to snap.
So cis and trans are the words that we use for these arrangements that are stuck together. Like I said, these isomers exist because free rotation around pi bonds is impossible.
So basically, the way that this works is that when two groups happen to be on the same side of the fence, I'm going to talk about what that is in a second, when they're on the same side, that's going to be cis. When they're on different sides of the fence, that's going to be trans.
So what kind of mysterious fence am I talking about? Well, let's say we have a double bond, the way that I like to split it up is I like to draw a dotted line right through the middle of the double bond. That double bond is my fence. Then what I say is how are these groups related to each other on that double bond.
For example, if I wanted to compare A and C are they on the same side of the fence or different sides? Well, they're both on the same side. They're both on the top side. So the relationship between A and C would be cis.
What about the relationship between B and C? What would that relationship be? Well, those are on different sides so that one would be trans. Got that so far?
How about the relationship between A and B? How about if I were to say what kind of relationship is that? A and B actually don't have a cis and trans relationship. The reason is because they're on the same carbon. Cis and trans only applies to atoms on other carbons, not on ones that are on your own carbon. So A and B would actually get a completely different type of name that we're not going to discuss here, but it wouldn't have to do with cis and trans. So cis and trans only has to do with the way that one atom to another relates to, the way that these relate to each other.
So here I've got two different versions of 2-butene. When I say that, you shouldn't be shocked. You should know what I'm talking about because that means that's a butane with a double bond in the 2 position. Easy. But these are not both the same molecule. In fact, they're going to have different physical properties. They're going to behave differently and stuff like that.
So what would be the names that we would give to these to show that they're distinctly different? The names that we would give would be – well, I would draw my fence and I would say, “Are these on the same side of the fence or different?” Same. So this one would be cis-2-butene. And then this one would be trans-2-butene.
All right. And these are – later on, we're going to talk about them – they're something called stereoisomers, which means that they actually are connected the same way, but they're shaped differently. But for right now just know that these are molecules that are locked in their position and they can't move.

Two groups coming off the same carbon never have a cis/trans relationship. In case you are wondering, they are called geminal (you don’t need to know this yet.)

The cis/trans nomenclature system is awesome, but it breaks down with multisubstituted alkenes.

Concept #2: Why we need to use the E/Z naming system

Now I want to talk about another naming system called E and Z. I call this the easy naming system and it's actually really easy. It's related to cis and trans. The only thing is that you use the E and Z naming system when you have multisubstituted alkenes. I know you can barely see that. Multisubstituted. Even when you can see it, it still doesn't make a whole lot of sense. My handwriting is terrible. So multisubstituted alkenes.
Let me give you an example. Let's go down to this example here. Assign cis and trans to the following alkenes. I don't need names. I don't need full names. I just want to know if it's cis and trans.
So let's start off with this first one. Would that one be cis or trans? The answer is that this would be trans. Because if I drew my fence along here, what you would see is that one group is on one side and one group is on the other. Does that make sense? Cool.
How about two, what would that be? Two would be cis because both groups are on the same side.
Now lastly, what about three? What would you say about three? So three is actually a trick question. There is no cis and trans. Why? Because I have three different groups. I have one here. I have one here. So that could be trans. But then I also have this one over here messing things up. Did I tell you how to figure out cis and trans when you have three things? No.
So basically the E and Z naming system is going to allow us to give unique names to tri and tetra substituted alkenes. What that means is that cis and trans only works if you have two substituents. But if you have more than two, cis and trans breaks down like in example three. Example three there's no way to use cis and trans there, so I have to use E and Z instead.

So the E/Z naming system allows us to name tri- and tetra- substituted alkenes.

The difference between E and Z

Concept #3: What does E and Z stand for?

Example #1: Assign an (E) – (Z) designation to the following alkenes if applicable

So I'm going to through the first one all by myself. I'm going to – what I mean by myself is with you guys just to guide you guys through it. And then we'll see (b).
So first of all, let's look at F. When I say that I have to do the highest priority groups on both corners, what is a corner? I'm just talking about this being one corner and this being another. So let's look at the green one first.
Is there a side of this double bond that is going to have the higher priority? Is there one of those substituents that's going to have a high priority? The answer is yes. Fluorine is going to have a higher priority over this group here.
Why? Because even though this group down here looks bigger, the fluorine has a higher atomic mass right away. What that means is fluorine beats carbon. Fluorine is further down the periodic table than carbon is, so this is going to be my high priority up here. Oops. Whatever. This is going to be my high priority up here.
Now let's move to red. For red, is there a way to assign which one is higher priority? Actually, these are both exactly the same. They're both CH3. So this is an example where I actually have four different substituents, but since I have two of the same substituent on a corner, I can't assign cis and trans or E and Z.
Why? Because there's no way to distinguish these from each other. They're both the same thing. So actually this one is going to be not available. I can't assign cis and trans unless there's different things on both sides. 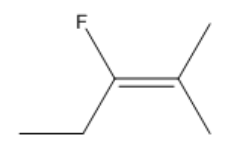 Example #2: Assign an (E) – (Z) designation to the following alkenes if applicable

Great! Now let’s combine this with what we’ve learned about functional groups (alkyl halides and alcohols) to name some more complex molecules.

Practice: Determine the IUPAC name of the following molecule 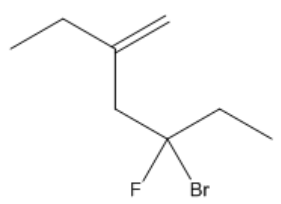 This was a great example of how the root chain must always have the functional group within it, even if it is shorter!

Practice: Determine the IUPAC name of the following molecule 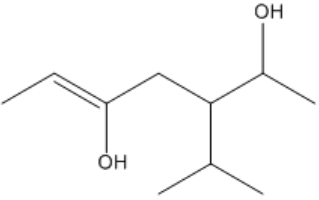 Hope you don’t hate me for throwing two alcohols in there! This is great practice though.

Videos in Cis vs Trans