Ch. 4 - Alkanes and CycloalkanesWorksheetSee all chapters

See all sections
Learn
Next SectionCis vs Trans Conformations

Instead of being planar, cyclohexane twists into something called a chair conformation to reduce angle and torsional strain.

Concept #1: What is a chair conformation?

So far in most of chemistry, we were drawing rings like that and we always assumed that they would just be planar. That they would just be like a flat thing on the paper. But it turns out that cyclohexane actually exists in a puckered, meaning that there's some angles that are in different directions, puckered form to alleviate both torsional and ring strain. Remember that torsional strain is the strain of having hydrogens eclipsing over each other.
Imagine that if it was planar it would have tons of torsional strain because all of those H's would be perfectly overlapping and the ones on the bottom too. It would also have a lot of ring strain because these bond angles would be 120 degrees versus it wants to be at 109.5. What winds up happening is that it winds up bending a little bit to form what we call a chair. The chair is almost like the perfect cycloalkane because it has pretty much no ring strain and no torsional strain.

By twisting into a chair, angle strain and torsional strain are now effectively zero.

Concept #2: How chairs flip from one conformation to another

So, I want to go ahead and talk about these chairs and it turns out that like single bonds remember that single bonds are allowed to rotate as much as they want it turns out that Cyclohexane can flip, OK? And it can flip to form two different what we call 'Chair confirmations' that are in equilibrium with each other, OK? So, these chairs basically have to do with bonds just bending back and forth but it doesn't actually change the molecule it's just a confirmation, OK? Remember confirmations are isomers they don't change the molecule and the reason that they're kind of like chairs is imagine that like you're just like sitting there and you're like this is like you're thrown and you're like I don't know you got like a bag of chips and you're watching T.V., alright? This is like a man's paradise right here Xbox, alright? So that's going to be my chair it doesn't look that comfortable but you'd be surprised it's actually pretty amazing so this will be one of the chairs, the other chair would just mean that I'm sitting in the other direction so now this guy over here he got like the limited edition other type of chair and this guy's rocking it he loves it, OK? So, this would be like a right facing chair and this would be like a left facing chair and these chairs are in equilibrium with each other, OK? So, it's never just going to be right it's never just going to be left it's always going to be passing through, now in order for it to flip from one to the other it's going to have to pass through this really unstable conformation that's called the boat and the way you can think of it is kind of like I'm on a boat, alright? So, I'm just like chilling and I'm on a boat and I've got my brewskis and it's awesome I'm swimming from Cuba, alright? So anyway, that would be a boat and it's not very stable, alright? It's probably not going to last too long so and that's because of the flagpole interaction that's what it's called 'flagpole interactions' that are basically around this guy's head and they're kind of like really close to each other, OK? So basically, the boat is a very minimal amount of that of the Cyclohexane, usually it's going to spend its time either being on the right chair or the left chair, OK?

In order to flip from one chair to another, the cyclohexane must first pass through a boat conformation (not stable due to flagpole interactions of hydrogens!).

Concept #3: How chairs flip from one conformation to another

So in order to understand chair conformations, we have to understand that there's two different types of position that chairs have. I want to just go ahead and just draw these out and hopefully, this will make sense to you guys.
The first and the easiest positions to visualize are what's called the axial positions. The axial positions are going to follow – oops that's not follow. Follow each corner. What that means is that if your corner is facing up, then your axial position is going to face straight up. You can see that this corner was kind of facing a little bit on the upside.
What about this corner? What direction is that one facing? Actually, it's facing kind of up because I have one that's going slightly up, slightly up, so I would expect my axial position to go straight up from here.
How about this one? That one both of them are going down, so I would expect my axial to go down.
If you draw in all your axial positions, they're going to look like this. The axial positions are always the easiest ones to draw and you should always start off drawing the axial positions. Are you guys cool with that so far? They follow each corner.
Now the equatorial ones are the tricky ones and they're the ones that if you're like a dude and you can't draw, these are the ones that are going to mess you up on the test, so you're going to have to be extra careful. Just already know, you have multiple risk factors for getting this question wrong if you're a guy and you can't draw. You have to be extra careful.
So equatorial, and I'm just going to say right now, I am one of those people. I have to be very careful. So equatorial, what I'm going to say is it's going to be slightly opposite to the direction of each axial. What that means is that imagine that each of these corners have two H's. Some of the H's are going to be on the axial positions. Each position has one axial. Each carbon has one axial. Each carbon also has one equatorial. The equatorial positions are going to face slightly opposite to the axial.
That means – notice this one right here. That one is facing up, that axial. That means that my equatorial position should face slightly down. That means this H, the equatorial one, would face slightly down.
Now let's look at this one. This one is facing down so that means that my equatorial positions should face slightly up. Is that cool? And you would do the same thing for all of these.
Then this one, my equatorial position would go slightly up. This one my equatorial position would go slightly down. And like that and like that.
Now you might be wondering why is it so important to draw these slightly down and slightly up. The reason is because I already made this huge point about how cyclohexane has no ring strain. I already kept telling you guys that. No ring strain means that the bond angles must be around 109.5. That means that you need all of these hydrogens to be 109.5 degrees away from each other.
For example, if you draw your hydrogen, let's say you draw your hydrogen like this. Is that right? No, because if you look at that bond angle, that bond angle is going to be much less than 109.5. That's going to be wrong. You need to make sure that you're always protecting that 109.5 bond angle in every single point.
On top of that, I'm not just being nitpicky. This is actually going to be the difference between you getting a question right or wrong once you start getting into cis and trans because cis and trans is based off of these bonds, these bond angles. So it's really, really improvement that you don't let yourself get lazy. And it's really important that you save yourself the headache and just start drawing them right from the very beginning. So that would be a much better H to draw.
Now that you guys understand the two different types of positions let's go ahead and go on to the next video. 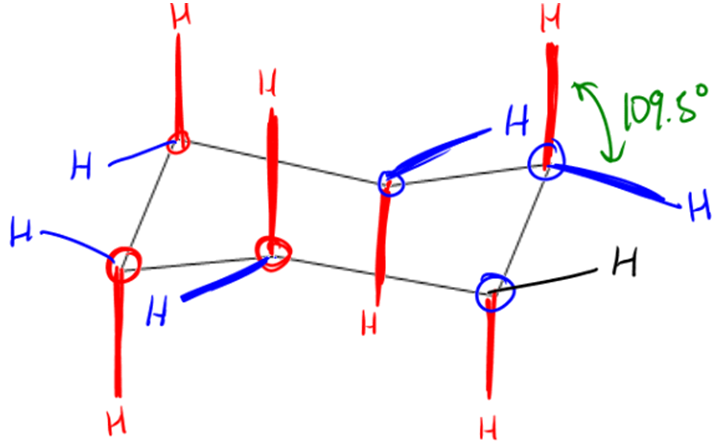 Videos in Axial vs Equatorial