Le Chatelier's Principle explains what happens to a system at equilibrium when it is disturbed.

According to Le Chatelier’s Principle if a system (chemical reaction) is at equilibrium and we disturb it then the system will readjust to maintain it’s equilibrium state.

For each of the choices below predict in which direction the reaction will proceed.

Practice: Consider the reaction below:

The following changes will shift the equilibrium to the left except one. Which one would not cause a shift to the left?

a) The reaction is exothermic.

b) The reaction is endothermic.

c) The enthalpy change, ΔH, is equal to zero.

d) Not enough information is given.

When looking at a chemical reaction we look at the two concepts of Kinetics and Thermodynamics to get a total view. However, remember that Le Chatelier’s Principle deals with Thermodynamics and not Kinetics.

Practice: Which direction will the following reaction (in a 10.0 L flask) proceed if a catalyst is added to the system? 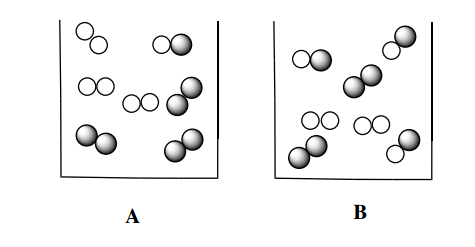 Which container proceeds more to completion?

Join thousands of students and gain free access to 0 hours of GOB videos that follow the topics your textbook covers.